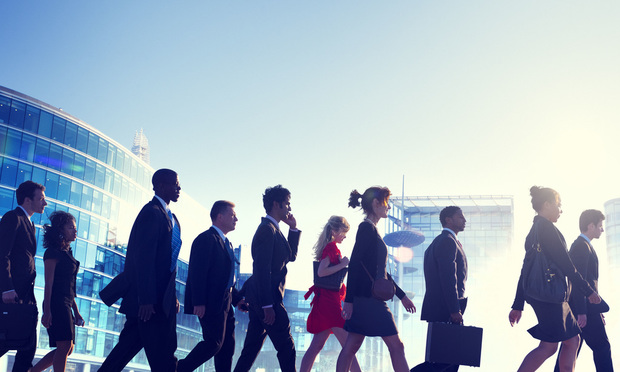 The legal services industry shed 600 jobs in December, marking the second straight month of declines even as the U.S. economy overall continued a record streak of job growth, the U.S. Department of Labor reported Friday.

In its monthly look at employment in the United States, the federal agency’s Bureau of Labor Statistics said 1,136,700 people worked in legal services in December, a figure that accounts for lawyers, paralegals, legal secretaries and other law-related professions. The December employment results are seasonally adjusted, and they’re provisional, meaning they could later be revised.

Also on Friday, BLS revised upward its initial count of legal sector employees in November to 1,137,300. That figure still amounts to a loss of 1,300 jobs compared with October, but with the revisions, the decline was smaller than the initial report of 2,400 jobs lost in November.

Despite the legal industry ending the year with two months of declining employment figures, the December jobs report released Friday also shows that the size of the legal sector’s labor market hasn’t changed significantly overall in 2018, according to BLS. The year’s low point came in February, when 1,135,500 people worked in legal services, while the monthly high in June counted a full 4,000 more people—1,139,500 people—working in the legal services field.

Generally speaking, the monthly results in 2018 all remained within a range that has prevailed over the recent past. Since December 2016, the legal industry has generally employed between 1.13 million people and 1.14 million people, according to historical BLS data.

The legal industry’s job results in December stand in contrast to the U.S. economy’s overall employment situation. BLS announced Friday that the country added a provisional 312,000 jobs in December, a number significantly higher than the 182,000 jobs that Wall Street economists reportedly thought the economy would gain in the month. The U.S. economy has now added jobs for 99 consecutive months, and for 2018, averaged 220,000 new jobs per month.

The nation’s unemployment rate ticked up to 3.9 percent in December from 3.7 percent in November. That figure, however, is still near a historic low. Wages also rose in December, according to BLS. Employees on private, non-farm payrolls earned average hourly rates of $27.48, an 11 cent increase over the prior month and 84 cents higher than at the start of 2018.

Legal Employment Fell in November Despite US Job Growth Streak

Legal Jobs Up in October Amid Rosy US Employment Report